Sri Lanka, an island in the Indian Ocean is located to the South of the Indian subcontinent. It lies between 5 55’and 9 55’North of the equator and between the Eastern longitudes 79 42’ and 81 52.

The total land area is 65,610 sq km and is astonishingly varied. A length of Sri Lanka  445 km and breadth of 225 km encompasses in a beautiful thing. Sri Lanka is fully Completely in beautiful tropical beaches and verdant vegetation. In Addition, ancient monuments and a thousand delights to please all tastes by Sinhala.

The relief features of the about island consist of a mountainous mass somewhat south of the center, with a height exceeding 2,500 meters, surrounded by broad plains. The palm-fringed beaches surround the island and the sea temperature rarely fall below 27 C.

The Island of Sri Lanka 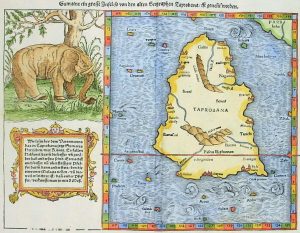 Sri Lanka lies 10 degrees. North of the Equator and South East of India,which at its narrowest point, separated from it by the Gulf of Mannar. In Addition, Polk’s Bay and Palk Strait,  Rameswaram in India and the Jaffna Peninsula, is less than 80 km wide.
The sea crossing between Rameswaram in India, and Mannar Island, off the North-West coast of Sri Lanka, is only around 32km. There is evidence of a natural land bridge connecting Sri Lanka with India at this point.  Indeed, this vanished causeway, only a few meters below sea level, is still known as Adam’s Bridge.
This close proximity to the subcontinent has meant that Sri Lanka history and ecology have always been exposed to strong influences from its larger neighbor. Only 640km North of the equator, SriLanka’s tropical climate shows little seasonal variation in temperature.

Around the coasts, temperatures hover between 26 C and 28 C. With a mean temperature in the capital of 27.5C inland.  However, average temperatures are very much cooler. From May to September, the South-West monsoon deposits heavy rain on the South-West coasts. It is from Colombo to Galle, and also raise heavy seas which make swimming and diving unattractive.
The worst intensity of the monsoon is from November to February, but this will have little impact on most visitors. It as the main resort areas and visitor attractions are concentrating in the South and the central hills.

Local thunderstorms can occur at any time of year. And while these are often intense they do not usually last more than a few hours. In the lowlands, the climate is typically tropical with an average temperature of 27 C in Colombo.
In the higher elevations, it can be quite cool with temperatures going down to 16 C at an altitude of nearly 2,000 meters. Bright, sunny warm days are the rule and are common. It’s even during the height of the monsoon – climatically Sri Lanka has not off-season.
The South-West monsoon brings rain mainly from May to July. It’s come to the Western, Southern and Central regions of the island. Then, it while the North-East monsoon rain occurs in the Northern and Eastern regions in December and January.

History Recent excavations show that even during the Neolithic Age, there were food gatherers and rice cultivators in Sri Lanka. Very little is known of this period.
It was documenting history began with the arrival of the Aryans from North India. The Aryans introduced the use of iron and an advanced form of agriculture and irrigation. They also introduced the art of government. Of the Aryan settlements, Anuradhapura grew in to a powerful kingdom under the rule of King Pandukabhaya.
According to traditional history, he accepted as the founder of Anuradhapura. During the reign of King Devanampiya Tissa, a descendant of Pandukabhaya. The Buddhism introduced in 247 B.C. by Arahat Mahinda , the son of Emperor Asoka of India.

This is the most important event in Sri Lankan history as it set the country on the road to cultural greatness. As a new civilization flourished Sri Lanka became rich and prosperous. In the mid 2nd century B.C. a large part of north Sri Lanka came under the rule of an invader from South India.From the beginning of the Christian era and up to the end of the 4th century A.D.
SriLanka governed by an unbroken dynasty called Lambakarna, which paid great attention to the development of irrigation. A great king Mahasen started the construction of large ‘tanks’ or irrigation reservoirs. Another great ‘tank’ builder was Dhatusena , who was put to death by his son Kasyapa who made Sigiriya.

A royal city with his fortress capital on the summit of the rock. As a result of invasions from South India the Kingdom of Anuradhapura. It fell by the end of the 10th century A.D. Vijayabahu(I) repulsed the attack. He established his capital at Polonnaruwa in the 11th century A.D.

Other great kings of Polonnaruwa were Parakramabahu and Nissanka Malla both of whom adorned the city. Its numerous buildings of architectural beauty.

Invasion intermittented and the capital moved constantly until the Portuguese arrived in 1505. When the chief city established at Kotte, in the Western lowlands. They came to trade in spices but stayed to rule until 1656 in the coastal regions, as did the Dutch thereafter.

The Dutch rule lasted from 1656 to 1796, in which year they displaced by the British. During this period in Kandy, retained its independence despite repeated assaults by foreign powers who ruled the rest of the country.

Modern communications, Western medical services, education in English, as well as the plantation industry developed during the British rule. It’s process of peaceful, constitutional evolution, SriLanka won back her independence in 1948 and is now a sovereign republic, with membership in the Commonwealth of Nations and the United Nations Organization.

Language has been a contentious issue in Sri Lanka. In the 1970s, Sinhalese demagogues promoted efforts to make Sinhala. It is the language of the Sinhalese majority – the sole language of education, administration and government.
This perceived the Tamil minority as a deliberate move to keep Tamils out of government. And exclude them from further education and the major cause of the discontent that eventually erupted into inter-communal violence.
Subsequently, a compromise reached in an attempt to satisfy both the disgruntled Tamil community and hard-line Sinhalese nationalists. Tamil and Sinhala ranked equally “national” languages. Tamil is also the largest language group in Southern India and the main language of TamilNadu, the Indian state closest to Sri Lanka.

After, sinhala is the first language of the Sinhalese majority. Meanwhile, English is still almost universally spoken by educated people of all communities. It is and the language with which Sri Lanka communicates with the outside world.
Despite being the language of the former colonial power, English is also politically neutral. Most of the people likely to encounter in shops, hotels, restaurants. And also traveling on public transport are likely to speak enough English. Get by taxi drivers usually speak some English, and bus and railway personnel are usually quite fluent. Out in the country side, English may be less widely spoken, though it is rare to find yourself completely unable to communicate.

Sri Lankans have triumphed internationally at athletics, among them, 2000 Olympic Games Bronze medalist sprinter Susanthika Jayasingheand others, including Sriyani Kulawansaand Sugath Tillekaratne. But it is Cricket that is the first and true love of all Sri Lankan sport fans.
When Sri Lanka, led by Arjuna Ranatunga, trounced the giants of world cricket to win the 1996 Wills Trophy in one-day internationals, there was dancing in the streets. When Sri Lanka’s team is playing in major international events the whole island is watching or listening.
Players are major stars, and probably the most popular public figures in the country. Any patch of relatively flat wasteland or village square is likely to have its complement of small boys playing an improvised game and no matter how crude or aged the equipment, the players will be as deadly serious as any World Cup final team.
If you are a cricket fan, you may want to watch a game at the Kettarama Stadium in North Colombo or at Asgiriya, in Kandy, where cricket is played from January to April. Sri Lanka also abounds in water sports, with some excellent scuba diving excursions offered by qualified dive shops.

Declared a republic in 1972, 14 years after independence, Sri Lanka has opted to stay within the British Commonwealth and maintains close links with Britain and with other Commonwealth member countries, especially those in Asia. The president, the prime minister and the single-house parliament are elected for a six-year term. With the power to dissolve parliament and appoint or dismiss cabinet ministers and the prime minister, the president is the real head of state, not merely a ceremonial leader.
Traditional foods
Sri Lankan Gem
Sri Lankan Batik
Tropical Fruit in Sri Lanka
Sri Lanka Fishing Industry
Spices in Sri Lanka