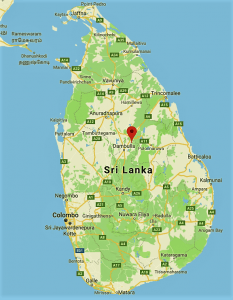 Sigiriya Called by numerous names including “The Lion Rock” for its underlying name of “Sinha Giriya” (Sinha = Lion, Giriya = Rock). The nearest main town of Dambulla, Central province.
The Sigiriya (Lion rock)  was an imperial fortification for a long time (477-495 AD) when it was bracing by King Kasyapa. The structural and irrigation advancements of Sigiriya, for example, the Water Gardens, still confuse engineers. The scale soak ventures of metal with railings passes a divider adorned with frescoes of uncovered breasted ladies. Craftsmanship specialists think about them one of a kind.