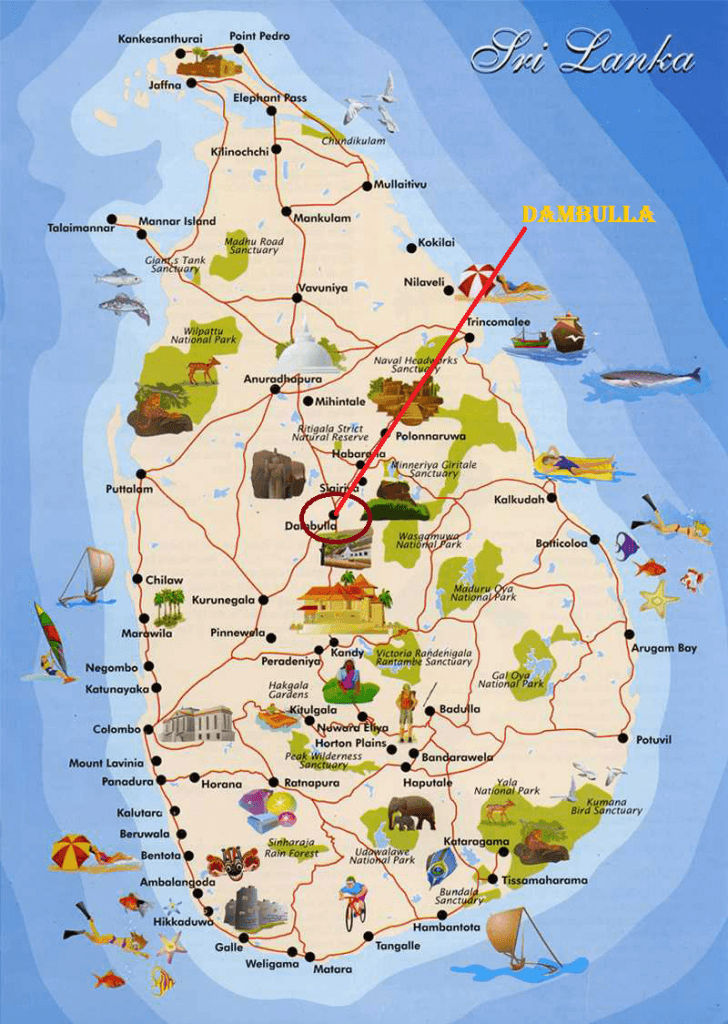 Then, Dambulla temple (golden temple)  is the biggest -preserved temple complex in Sri Lanka. So, the rock towers 160 m over the surrounding plains. This temple paintings and most of the statues related to Buddha and his life. 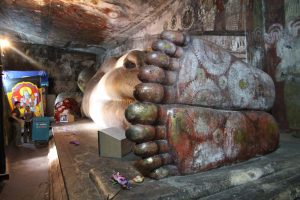 The most important, the first cave called Devaraja Lena (cave) mean is the temple of the king gods. reasons god of  Sakka (king of god) gave the finishing image of this area. In the first place, this large statue (Image) is the parinibbana position in sri lanka. (the last moment of budda)  , built at the base of a 150m high rock during the Anuradhapura period. (1st century BC to 993 AD). Buddha in the typical style is about forty-seven feet in length. 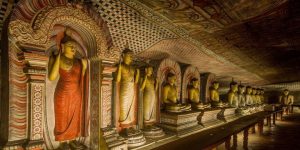 In the second place is Maharaja cave. In Dambulla temple complex this one is the most beautiful and large. Dambulla meaning is Damba (rock) – Ulla (drop water). in the second cave has a special place, can see that. sri Lankan peoples they expected those are holy water.

who enters by the door at the northern corner of this cave first comes across a figure of the standing Buddha under a neatly executed Makata Torana, both sculptured out of natural rock. This is the principal images of the shrine room. This image is in Abhaya Mudra. The right shoulder and arm are bare. The lips are thick. There is a stiffness of the limbs and a wooden rigidity of the body. The image is standing on a stone lotus pedestal circular in shape.

The principal paintings of this part are: 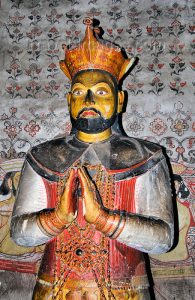 In third place is Maha alut Viharaya. This Cave, called Maha Alut Viharaya (The Great New Temple), is separated from a second cave by a wall of masonry. These frescoes depict various and numerous events of Buddhists, some representing the life of the Enlightened One, and score the history of Buddhism. The artistic tradition of this cave is that of the Kandyan period. 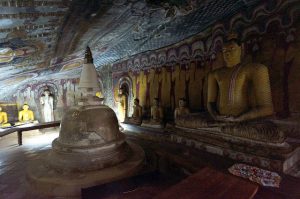 In Forth Place is Paschima Viharaya. So, this place contains ten figures of the Buddha. The principal image which is under a torana is of the same size as the other statues. This is a very beautiful figure of the Buddha seated in the dhyana mudra (posture of meditation) hewn of the natural rock that forms itself.

See the best places to visit in Colombo with a plan including Sri Lankan Riders - Holiday & Tours
//naucaish.net/4/3684572
× How can I help you?
Loading Comments...
Comment
×