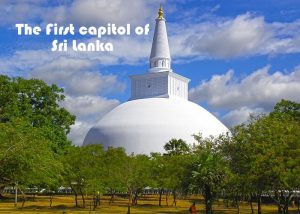 Jethawanaramaya was built by King Mahasena of Anuradhapura (276-303) completed by his son Sirimeghavanna. This is believed to be the chamber where the remains of the great thero rest.

Then, Kuttam Pokuna means for Twin Ponds in native Sinhala Language and located in Anuradhapura. These ponds believe to build in King Aggabodhi time and one of the remaining monument about old Sri Lankan innovativeness. The primary point of this pond is to supply water for The monks who live in Abayagiriaya Aramaic Complex. Those twin ponds are in two different sizes. Water flows from a larger one to the smaller one. Both the ponds have steps, which leads to the Bottom.

Then, mahamevuna Uyana Anuradhapura, “Samadhi Budu PilimayaThis limestone image of Lord Buddha is dating from the 3rd Century. Seated under a Bo tree, depicts the Buddha in the serene state of Samadhi, or deep meditation. Then, the kindness of Lord Buddha flows through the half-closed eyes, Watch as long as you like. This is the finest Meditation Buddha statue in the whole World.

Then, Abhayagiri stupa belongs to the ceramic complex of Abhayagiriya Viharaya which was constructed in the reign of King Vattagamini Abaya (commonly known as King Valagamba) in the 1st Century BC.

Today, the main attraction of this Aramaic complex is the massive Abayagiri Stupa which stands at 74.98 meters to the tip of the damaged spire. It is the second largest stupa in the island today. So, according to the 5th-century traveler Chinese monk Fa-Hsien’s descriptions, this stupa has been 400 feet (122 meters) in height and has been decorated with gold and silver and studded with all kinds of jewels of course.

So, this monument carries a special importance in ancient Sri Lankan Stupas as the top portions of the original stupa (known the “hatharas kotuwa”) still survives after thousand years of negligence, giving a glimpse to what it would have looked like thousand years ago.

Actually, today there is a massive effort by the archeological department to restore this stupa to its original glory without destroying the archeological value. The work has been painstakingly slow due to the lack of funds.

Known in Sinhalese as Sandakada Pahana (Lamp), it is roughly translating into English as moonstone. The name is based on its shape and design. The first Moonstone was creating during the latter stage of the UNESCO ancient Anuradhapura Kingdom.

The carvings of the semi-circular stone slab were the same in every Sandakada Pahana. A half lotus was carving in the center, which enclosed by several concentric bands. Indeed, the first band from the half lotus is decorating with a procession of swans, followed by a band with an intricate foliage design known as liyavel. So, the third band has carvings of four animals; elephants, lions, horses, and bulls. These four animals follow each other in a procession symbolizing the four stages of life: growth, energy, power, and forbearance. The fourth and outermost band contains a carving of flames, usually interpreted as representing a fire altar.

Also, the guard stone or “muragala” was one of an association of three aspects of sculpture that adorned the entrance to buildings in ancient times, the other two being the moonstone (Sandakada Pahana) and balustrade (Korawak Gala).

The guard stones, which provided a support to the heavy stone balustrade, were plain in the beginning. Zoomorphic sculptures of multi-headed cobras have been found at the sluices of reservoirs, and at the four corners of relic chambers enshrined in “dagabas”.

Then, Lankarama is a stupa building by King Valagamba, in an ancient place at Galhebakada in the UNESCO ancient kingdom of Anuradhapura, Sri Lanka.  The ruins show that there are rows of stone pillars and it is no doubt that there has been a house built encircling the stupa (vatadage) to cover it.

Also, Thuparamaya is the oldest Stupa in Sri Lanka. It Built after introducing Buddhism to Sri Lanka. So, this Thuparamaya, built by King Devanapiyatissa, enshrines the sacred collar-bone of the Buddha. The columns around the stupa were a part of the walkway that supported a roof which covered the sacred edifice. So, the interior of such a structure must have been the stunning expression of wood engineering and of the most skillful craftsmanship.

The edifice’s conical design, unique in the architectural history of the world, continues to be discussed and debated by scholars and scientists. Interestingly, the shapes of the vessel were the module to economize on the expensive fluid. The name Thuparamaya is a residential complex for Bhikkhus.

Then,  Ruwanwelisaya is a stupa, It is building by King Dutugemunu C 140 B.C., who became lord of all Sri Lanka after a war in which he Chola King Elara, was defeating. So, this is one of the “Solosmasthana” (the 16 places of veneration) and the “Atamasthana”…  This stupa is one of the world’s tallest monuments, standing at 103 m (338 ft) and with a circumference of 290 m (951 ft) The Kaunghmudaw Pagoda in Sagaing, Myanmar is modeling after this stupa.

Actually, this Anuradhapura UNESCO city site is very important everyone.The stupa was a ruin in the 19th century. After fundraising efforts by Sinhalese bhikkhu, it renovated in the early 20th century. Indeed, the Ruwanveli Seya Restoration Society founded in 1902 and the final crowning of the stupa took place on 17 June 1940.

Sri maha bodhiya is main place of anuradhapura ancient city. It also, the Sacred Bo tree; Jaya Sri Maha Bodhiya of UNESCO site of Anuradhapura, Sri Lanka is the oldest living tree in the documented history of the world. Sri Maha bodhiya is main worshiping place for buddhism. It is a sapling from the historical Bodhi tree under which Buddha enlightened. Actually, this is planting in 288 BC. So, it Recorded the oldest tree in the world.  Sanghamitta Therini, a sister of Arhant Mahinda – who introduced the Teachings of the Buddha to Sri Lanka.

Finally, the Meghagiri Vihara which called the “isurumuniya”. So, this was belonging to the abayagiriya Vihara in the 4th Century A.D.